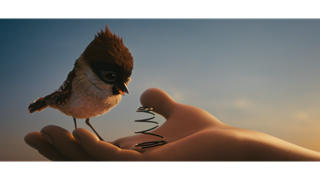 Our life is like walking on a tightrope. In times we are scared or lost we lose balance. When we are happy and excited, we forget we walk on a rope. We can even fly! Main characters are girl Luba and her friend Sparrow. Silly Sparrow doesn’t know fear. By playing with him Luba forgets that she is on a rope.

Tonight, Anna and her dad have decided to walk home through the forest. Anna takes a torch and dad lights it up for her. The silent forest is as enchanting, as it is scary and the bright flame as protective as it is blinding.

They had a normal father-daughter relation. One day she told him to set off for a wedding party in Denmark. But that was a lie. A few months later she started her new life – as the wife of a djihadist living in Syria.

Everything avoidable during one’s lifetime might later become the building blocks of the afterlife. Here, fears have to be faced and journeys to be taken alongside one’s shadow.

Have you ever been curious about how an old man, who is ignored by family and society, starts each day? The old man goes to mend window screen by his bike. He passes through busy streets, buildings under construction, an evening market and finally the Mazu Temple. In such an era, what kinds of scenery, smells and sounds surround him? Could all the ups and downs of his life attribute to calms on this day?

Punished by his mother, a ten-year-old boy, who hates his little brother, is forced to spend an afternoon with an uncanny old man. The boy will receive a lesson in life by uncovering the old man’s terrible secret.

„Monsters Walking“ is a short film about monsters that walk.

The film is made up of thousands of drawings of everyday objects done by the artist. Superimposed, condensed, multiplied, they invade the space. The accumulation, both fascinating and dizzying, takes us on a trip through time.

A political manifestation is unfolding. At one point a Molotov is thrown to the cops. It’s a clash. Camilla helps a wounded among the protesters, climbs into the ambulance, crosses the security barrier and finds herself in front of a mysterious palace.