The on-demand programme OnlineFestival+ from 5 to 10 May 2020

The OnlineFestival+ section is filled with more and more films, now already about 200, including nine confirmed feature films! Among the feature-length films is also a European premiere: “A Costume for Nicolas” by Eduardo Rivero (Mexico, 2019), but also cult films such as the Oscar-nominated stop-motion classic “Mary & Max”.

OnlineFestival+ is the platform for all animation fans with a selection of the latest entries from the following competitions, which can be watched on-demand from 5 to 10 May exclusively A special highlight: Thanks to numerous video statements by the filmmakers, viewers can gain an insight into their work and find out more about the film. Selected children’s films by Tricks for Kids will also be accompanied by media-pedagogical material.

In addition, animated films from the supporting programmes Best of ITFS and Panorama will be shown.

This access to the OnlineFestival+ costs 9,99€ once and can be bought from 5th May on OnlineFestival.ITFS.de. The access ends on 10 May with the festival.

International Competiton
The international scope of the short films as well as the variety of topics reflects the usual high quality programme of the ITFS: From Tomek Popakul with “ACID RAIN” (Poland, 2019), the Colectif Illlogic with “Maestro” (France, 2019), to renowned studios like Tumblehead Animations with “Tales from the Multiverse” (Magnus Møller, Mette Tange, Peter Smith, Denmark, 2019), up to well-known stars such as Konstantin Bronzit with “He can’t live without cosmos” (Russia, 2019) – the International Competition shines with artistically valuable and entertaining animated short films.
>> Watch Peter Smith Video Message and a clip of “Tales from the Multiverse” here!
>> Filmlist

miere: “A Costume for Nicolas” / Director: Eduardo Rivero (Mexico, 2019, 83 min, OV with English subtitles), about a ten-year-old boy with Down’s syndrome, whose mother made a costume for his birthday every year – until she died. And so Nicolas joined his loving grandparents and his cousin David. Nicolas is soon to use these magical costumes to save his cousin from his nightmares and a whole kingdom. 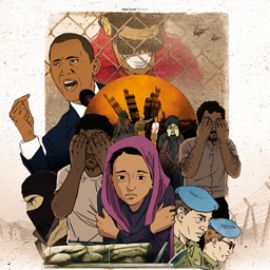 Blies and Stéphane Hueber-Blies (France/ Luxembourg, 2018, 92 min, OV with English subtitles) of AniMovie Competition 2020: An animated artistic documentary and a call to join the growing global movement that tolerates zero tolerance for sexual violence in war zones around the world – including Syria and Ukraine, on the African continent and in the USA. Zero Impunity features inspiring victims, social workers and activists around the globe who have the courage to get involved, resist and mobilize others. These stories confront us with the terrible mechanisms of international institutions and ancient methods of war and interrogation. A film about love, life and humanity. Watch the video message of the directors here!

, France, Belgium, 2019, 92 min, OV with English subtitles) also of the AniMovie Competition 2020 about Marona, a mongrel dog who was hit by a car. She is still in a state of shock when she feels her soul slowly rise and leave her body. She sees cars racing by and roaming over her lifeless body, while Solange, her current last mistress, sheds crocodile tears for her.
>> Can only be watched in Germany!

by Adam Elliot (Australia, 2008, 92 min, OV in English with German subtitles) as a mixture of “Wallace & Gromit” and “Harold & Maude” a suitably advertised clay animation film, which will also be streamed at OnlineFestival+ With wit and warm-heartedness as well as a sharp eye for detail the story of two deeply sad characters is told, who find joy in life through their friendship with each other. 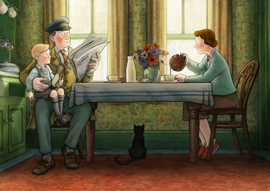 and Ernest” (Director: Roger Mainwood, UK 2016, 94 min, Nominee AniMovie ITFS 2017, OV in English) is based on the book by renowned British author and illustrator Raymond Briggs and tells the true story of Briggs’ parents Ethel and Ernest – two ordinary Londoners living in a time of extraordinary events and social upheaval. From the 1920s with its social stratification to the moon landing in 1969, the film shows decisive moments of the 20th century. 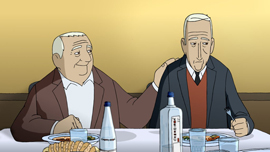 Spain 2011, 90 min, AniMovie winner ITFS 2012, OV with English subtitles) is a rousing portrait of the friendship between Emilio and Miguel, two elderly gentlemen who were deported to a nursing home. The newcomer Emilio has Alzheimer’s in the early stages and is saved by Miguel and his colleagues from ending up on the dreaded top floor of the home. Their wild plan lends a good dose of humour and tenderness to their otherwise boring daily routine.

AniMovie winner of 2016 “Psychonauts, the

forgotten children” / Director: Pedro Rivero, Alberto Vázquez (Spain 2015, 75 min, OV with English subtitles) tells of Birdboy and Dinky, two teenagers who decided to flee their island after a natural disaster: Birdboy’s plan is to simply withdraw completely Dinky, on the other hand, takes flight and wants to set off on a dangerous journey – hoping that Birdboy will accompany her after all. Pedro Rivero also gives an Master Class in our free live-stream on May 8, noon.
>> To Facebook Event 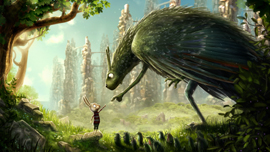 Beyond Beyond” / Director: Ebsen Toft Jacobsen (Sweden, Denmark 2014, 78 min, recommended from 6 years, German Version) about Johan, who for as long as he can remember, he and his father lived by the sea. At least he was three and his mother disappeared. Johann is good at diving and is a talented mechanic. He helps his father repair the ship. One day Johan receives a distress call on the radio with a note about his mother’s whereabouts…

The free live stream on OnlineFestival.ITFS.de on 7 May (Focus France from 8 pm) we show “A Monster in Paris” 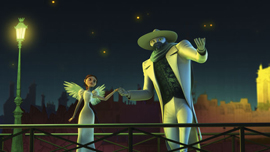 am 7. Mai / Director: Bibo Bergeron (France, 2011, 90 min, German Version) about a strange creature that terrifies Paris of the year 1910 The culprits are Emile, a shy projectionist, and the crazy inventor Raoul. They created the creature by mistake. So the two friends go on a monster hunt to make up for their mistake. During their surprising adventure they make the acquaintance of the beautiful and warm-hearted singer Lucille.

Young Animation – the next generation of the animated film scene
From South Africa, to China, Japan, the USA and Europe: about 60 films by students from all over the world show the spectrum of current animated film production.
>> Filmlist

This access to the OnlineFestival+ costs 9,99€ once and can be bought from 5th May on OnlineFestival.ITFS.de. The access ends on 10 May with the festival.

This site uses Akismet to reduce spam. Learn how your comment data is processed.