In 2015 Stuttgart will again open up the doors to the great world of animated film. Already in April the first warm-up events are going to start.

The ITFS is one of the biggest and most important international festivals for animated film. It has developed into an essential event within the field of animated film in Germany and worldwide. Around 85,000 visitors and approximately 2,500 accredited professionals attended in 2014. Be a part of it and take the chance to meet well-known filmmakers and young talents, and to participate in numerous workshops, informational events and presentations.

By the beginning of 2015 you will be informed about the first programme informations of the 22nd Stuttgart Festival of Animated Film. 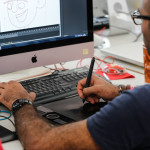 Artistic animation and the promotion of up and coming talent make up the core of the ITFS. The various competition categories award cash prizes totalling more than 50,000 euros. Be a part of it! We invite you to submit animated films produced after Oct 1st, 2013! Submissions

The open air cinema, free of charge, will take place in the Festival Garden at the Schlossplatz – the perfect opportunity for all those interested to catch a glimpse of the world of animated film and to celebrate in a great party atmosphere, with family programme, blockbusters, classics, animated music videos, on a huge LED cinema screen. In the Gamezone youths can immerse in the world of the newest games. More

World-renowned animators have expressed how much they love the Festival’s unique and intimate atmosphere. Together, the ITFS, the Animation Production Day, and the first-class industry conference FMX have developed into an important platform for the financing and development of animated projects. More